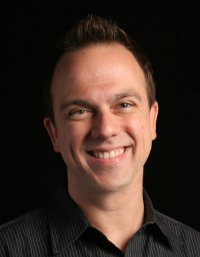 I thought I would start a new series of blogs about composers that I respect, and whos music I think is shaping the classical music of the 21st century. I’ll be doing this by telling you about how I discovered their music, and how they personally affected me in the beginning. I’ll be introducing you to some of their work, and pointing you to where you can find more, so you can discover them for yourselves.

I was introduced to Carlos Rafael Rivera’s music back in 1998, when I was a student at the University of Texas studying classical guitar with Adam Holzman. Every Wednesday afternoon, all the guitarists in his studio would attend “rep. class”. This was a kind of master class, where various people would play whatever pieces they were working on in front of everyone, and Adam would comment (or yell – lol).

One big part of a classical guitar student’s year is the Guitar Foundation of America’s annual international guitar competition and convention. Winning the competition usually means the start of a real concert career for the guitarist, so it’s taken very seriously by anyone who wants to become a professional classical guitarist.

Every year, the GFA releases a list of required pieces that all participants must master, and perform at the competition. This year for example, the required piece – referred to as the “set piece”, is Astor Piazzolla’s “Compadre” from his work Cinco Piezas. The set piece usually comprises some kind of work that is standard to the classical guitar repertory, and contains techniques that the GFA feels every classical guitarist should be able to execute.

So, what does the GFA competition and set pieces have to do with Carlos Rafael Rivera?

Before 1999, part of the GFA competition was their annual competition for composers of guitar music. The composers would submit their pieces, and the piece would be judged by a panel of guitarists and representatives from the GFA. The winning piece would not only be published, but would be the second set piece that every guitarist was required to play in the competition. Unfortunately, in 1997, the GFA lost its resolve for the program, and announced that 1998 would be the final year for the composition competition.

I believe that this decision was made partly because of most of the music that won and became set pieces over the years. I remember sitting in rep class, week after week, listening to the guitar students that were preparing for the competition play these pieces over and over again. And to be completely honest, most of these pieces were downright horrible. I will never forget the winning piece from the 1997 competition. I don’t remember the composer, but the piece was called EtuDE – yes, those last 2 letters were capitalized. It was this long, naively atonal work, with the distinguishing feature of having the guitarist stop in the middle of the piece, and sing “DEEEEEEEE!!!!!” on the pitch D, and then continue with the aimless atonal music. It was ridiculous, and hilarious at the same time – but can you imagine being a judge at the 1997 GFA competition and having to listen to hundreds of guitarists yell “DEEEEEEE!!!!” for 3 days in a row?? So, with many debacles of music like this one, the GFA decided to cancel the composers program, and that 1998 would be the final year.

Of course, irony was in full swing, and sure enough, in 1998, they got their best piece ever. It was a piece of music by then student, Carlos Rafael Rivera called Whirler of the Dance. As in years past, I heard several guitarists in rep class play Whirler of the Dance week in and week out, and the piece got better every time I heard it. I think everyone was in agreement that this was a great piece, and now instead of people feeling kind of relieved the composer project was going away, I think Carlos actually made them start to regret canceling it (although the GFA has never resurrected the program).

The winner of the competition that year was the great Serbian guitarist Denis Azabagic, who was a mere student himself then, but is now recognized as one of the best out there. Here is video of Denis performing all three movements of Whirler of the Dance:

Since then, Denis has developed a great relationship with Carlos and has commissioned other work from him and professionally recorded and released his music.

You can find other music by Carlos on iTunes, including his piece La Maja y el Hechicero written for Azabagic’s flute and guitar duo, Cavatina Duo. Actually, you can download this for FREE on iTunes, as well as the Cavatina Duo’s entire concert, so you have no excuse for not checking it out!! hehe