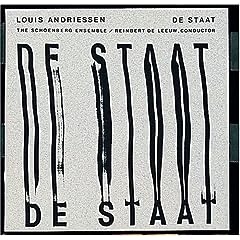 I was first introduced to De Staat in the Spring of 2000, during my last semester at the University of Texas. My friend and fellow composer Rafael Hernandez and I would, at least once a week, listen to pieces of new music that we didn’t know, but felt like we should know. One week, Rafael chose De Staat by Dutch composer Louis (pronounced Louie) Andriessen. The only other thing of Andriessen’s I’d ever heard was a performance by Bang on a Can of his Hoketus, which I wasn’t into at all (and I’m still not). So, we sat down to listen.

I’m not sure why, but when I heard it for the first time at our little listening session, I violently rejected it. I hated it – plain and simple. I don’t know if it was just because it was something so different and so out of my experience at that time that my brain just wouldn’t take it in – lol – idk.

About a year later, during my first year at Indiana University, I was in the music library, and for some inexplicable reason, I decided to give the piece another shot. I checked out the CD and score, and sat down to listen to De Staat for the second time.

About 6 or 7 minutes in, my mouth was hanging open, and I was thinking “How could I have totally misjudged something so terribly.” It actually kind of disturbed me, and taught me a valuable lesson, which is when approaching something new, to try to drop all of your preconceived notions about what makes something “good” and try to be as open as possible. This is of course easier said than done, but I still try to live by this rule.

The first thing that really stuck me about De Staat was the “orchestra” itself. It is highly unusual – and Andriessen wrote so many works with similar orchestras, that “Andriessen bands” have now begun cropping up across Europe. The orchestra for De Staat is:

Furthermore, the whole orchestra and voices were miced and mixed (as in amplified with microphones, etc and mixed by a sound engineer through a mixing board), more like a rock band would be than a classical ensemble. The text excerpts that Andriessen used are from Plato’s Republic, which consist of dialogues between a teacher and a student learning about music and how those concepts relate to Greek society (and contemporary society as well).

I will post an excerpt from the piece below, as the entire work is about 36 minutes long. One of my absolute favorite parts begins at 5:46 in the excerpt. It’s some of the most dynamic brass writing I’ve ever heard, and I always wondered how many rehearsals it must have taken to get that tight. Another technique Andriessen used is antiphonal placement of the brass, which hearkens back to the 16th century, when Andrea and Giovanni Gabrielli would place multiple brass groups on the north, south, east and west sides of St. Mark’s Basilica in Venice, Italy. The parishioners would have sound coming at them from different places at different times, or sometimes all at once. It was the worlds first form of surround sound.

Andriessen has followed this tradition by splitting the brass into 2 groups and placing them on the far right and left of the stage, stereophonically. It’s difficult to hear in the recording (although it’s a little easier to hear with headphones on), but at the 5:46 mark in the excerpt, he really uses it well. Live, you would hear the brass shooting back and forth from left to right to left, etc very fast. I’ve unfortunately never seen the piece live, but it must be striking to hear. 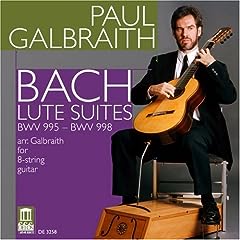 This is actually two different CDs, but they both came out at about the same time, and I discovered them both at the same time. All of these pieces were favorites of mine before I ever heard of Paul Galbraith. When I first saw the CD, and the picture of this guy playing a funky looking 8-string classical guitar, slung over his left shoulder like a cello and sporting an end-pin (also like a cello) that was sitting on top of a big resonator box on the floor, I was like WTF?!?

Galbraith’s approach to guitar playing is totally and utterly unique. Where he got the idea to have such a guitar built, and also the idea to completely reject and re-invent classical guitar technique I have no idea. But, it all worked, and worked incredibly.

Because of his increased range (his guitar has one extra high string and one extra low string), he could play the Bach pieces as they were intended to be played. What I mean by this is, as guitarists, we constantly have to bring bass notes up an octave from where Bach wrote them, because our modern guitars simply don’t have the range that the lutes of Bach’s day did. Hearing Galbraith’s versions in the original octaves and his incredible ornamentation skills really put these pieces in a new light for me, and expanded in my mind what was possible with the guitar. Galbraith’s design for his 8-string guitar inspired my own design for my 8-string electric guitar.

I’m going to post the entire Prelude, Fugue and Allegro BWV 998 below. This is one of the greatest pieces by Bach, period, hands down, for any instrument or combination of instruments in my opinion. It also contains one of Bach’s greatest fugues, period. It’s sad that these pieces are little known outside of the classical guitar world, simply because they don’t exist in any other forms like many of the violin sonatas and partitas do for example. I should mention that this piece is starting to come to the attention of more keyboard players with the re-discovery of the lautenwerk, a lute-harpsichord that was played by Bach, and many believe he really wrote all of his lute suites for this instrument and not for the lute itself. For a very long time, people knew about the lautenwerk from books, but not a single instrument survived to the present day, so it wasn’t until very recently that a few harpsichord makers actually started to re-create lautenwerks based on descriptions from baroque sources. There’s actually a fantastic recording of the Prelude, Fugue and Allegro on the lautenwerk on the Naxos label by keyboardist Elizabeth Farr. 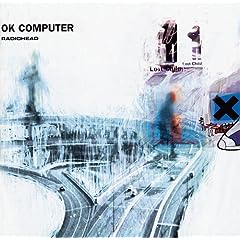 I first heard OK Computer at a party in Indiana. I had heard of Radiohead, and their early “hits”, like Creep, which I liked, but wasn’t knocked out by or anything. After kind of hearing OK Computer in the background during the party, and catching bits of it here and there, I asked the guy hosting the party if he would mind playing the CD again. No one seemed to mind, so he did and I really listened the second time around.

I was amazed by the variety in the album, and the complexity of the song writing, but at the same time how incredibly unified every song was. And despite the great variety among songs, the album seemed incredibly unified as a whole. From here I started to check out more of their albums (at this time Anmesiac has just come out). Radiohead seemed to be able to take huge risks in re-inventing themselves with every album, yet managed to produce something that was at least as good as their previous effort, and still come out sounding like themselves – a feat that they continue to pull off to this day.

I can tell you, from a composers perspective, this is the ultimate achievement in creating music – creating a sound that is all your own, while being so ingrained in that sound, you can branch out and experiment while maintaining the integrity of it all. These guys are, to me, every bit as genius as any classical music composer ever was. 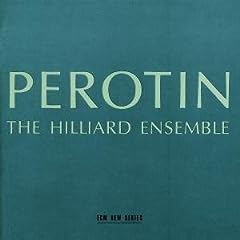 A few years later, I was full on into studying early music, and just starting my renaissance lute study with Nigel North at Indiana University. I don’t remember how I found this CD – all I remember is how blown away by it I was. I guess I was expecting to hear something like chant, or even something like renaissance church music that you’d expect – something like Palestrina I guess. This was a sound that I totally didn’t expect – that I’d never heard. It was like something from another planet to me when I first heard it. I had no idea that music like this ever existed.

I should get into the history of it a little bit so you can understand. Perotin lived in France around the year 1200, and worked in the then recently completed Notre Dame cathedral. All we know of him comes from what are essentially class notes, taken by a music student there a generation after Perotin’s death, from a student only known to us as “Anonymous IV“. Anonymous IV referred to him as Perotin the Great, and as the best composer of discant, which was an early form of polyphony. The reason I had never heard anything like this is because in later centuries, as the renaissance grew, this kind of polyphony was deemed “archaic”, and was strictly forbidden, ensuring that Perotin and his music would be lost to time for about 6 or 7 hundred years (until re-discovered in the 20th century).

Perotin’s music has had a HUGE impact on me as a composer, and I have used his polyphonic and contrapuntal principles in my own music. I look to Perotin as a teacher of counterpoint more than I look to Bach, and that’s saying something for any composer. I can only imagine what this music must have sounded like in the massive, reverberated, cavernous space of Notre Dame. It must have sounded truly like music worthy of praising God. Listen for the incredible 2-1 suspension at 9:27 – gives me chills every time. 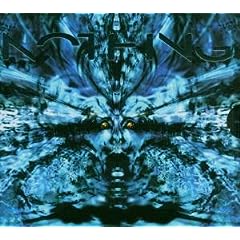 Around the same time, my friend Rafael Hernandez was introduced to Meshuggah through one of his students, and he introduced it to me, knowing it might be something I would like. Even though I’ve been a long time fan of metal, I hadn’t discovered anything new that really blew my socks off in probably ten years or more, so I wasn’t expecting a whole lot. But again, as with every other album on this list, it simply blew my mind.

Meshuggah is part of a new wave of metal coming from the Nordic countries – in Meshuggah’s case, Sweden. They’re breathing new life and vigor into the genre, and for me, Meshuggah is the best of the lot. You have to think of this music as almost exclusively rhythm – like a tribal drum ensemble or something. I have never heard such complex rhythm in any kind of popular music as with Meshuggah. The odd meters and complex poly-rhythmic patterns are mind bending – and I think the drummer is super human – hehe. The guitar soloing style is also really unique for metal. It’s more akin to jazz fusion a la Allan Holdsworth than anything in rock or metal guitar.

I also feel I need to say something about the “cookie monster” vocals – lol. Many people dismiss these vocals as merely some guy screaming, with the tone of the voice immediately conjuring feelings of screaming out in pain, or anger. I would ask you though, if you were going to invent a vocal style that would match the tone and timbre of the heavily rhythmic and distorted guitars, what would you do? This is essentially what vocalist Jens Kidman has done, and rhythmically speaking, his vocal delivery is right in step with the complex rhythms of the band around him – almost very close to rap at times in terms of rhythmic placement of syllables.

Meshuggah continue to put out great albums, my favorite being Catch 33. But, Nothing was where I started with them, and I still love it.