In 2000, I was banned from Napster by Dr. Dre. How do I know this? Because I logged onto Napster one day and got a message that said “YOU HAVE BEEN BANNED BY DR. DRE!” I stared at the message in disbelief. How could Dre do that to me?? It’s true – I did download his music from Napster, but I then turned around and bought his CD. Doesn’t he know this? We’re not out to rip anyone off – we’re still responsible! If I like an artist that I download, I buy the album. I’m a good downloader….

That’s how I felt back then. Napster was exciting when it first appeared. It broke all the rules – it was about power to the people – about sticking it to the man – about taking control from all of those evil record companies. Napster gave the common person a power that they had never had. I thought it was great. Almost everyone did.

Then, some artists decided that Napster might not be a good thing, and some saw the writing on the wall. Among the most outspoken were the rapper Dr. Dre, and Metallica drummer Lars Ulrich. These were both artists that I loved and admired. I couldn’t wrap my head around why they were doing this, and at the time I subscribed to the same argument that was relentlessly used against them – that they were super rich artists that only cared about money.

I remember seeing parodies at the time – I think this one sums up what people were thinking at the time pretty well. It was made at the time – in 2000 or 2001. Just a warning, if you’re offended by language, you might not want to watch it.

That pretty much sums it up – Lars was just a petty, rich asshole that didn’t want his millions diminished.

Now – it’s 2014, and 14 years have passed. I’ve spent those 14 years as a musician, and my attitude towards this event has turned 180 degrees. Lars’ argument was never about the money – he tries several times to explain this on this episode of Charlie Rose from 2000, in which he has a very interesting debate with Chuck D of Public Enemy, who is on the side of Napster.

Lars sums it up with a beautiful and prophetic question at 14:40 – he says:

And that’s the real issue isn’t it? And we can see the effects of it clearly 14 years later. He even makes a startlingly accurate prediction about Napster itself at 16:11, where he says that Napster has investors behind it, and they’re just waiting for the day when they can become their own IPO and reap millions from their hard work. And that’s EXACTLY what happened.

Chuck D had many good points as well, such as around 21:43 he points out that Napster has started a new paradigm – one that we will all have to adapt to. In this, he was right. We’ve all had to figure out new ways of surviving as artists. But his pro-Napster arguments, which seemed so powerful at the time all boil down to empty, power-to-the-people cheer leading.

The net effect of what was started with Napster is this – there is now a prevailing attitude that music should be free. This extends to almost any form to creative content. I have friends to this day that still hold a grudge against Lars Ulrich, and firmly believe that they have the RIGHT to music for free. Even suggesting that they pay for it offends them. This is the most damaging legacy (to artists of any kind) left by that whole debate, and by Napster.

I’ve been thinking about this a lot lately since putting out my own album and looking back on my own history as an artist on the internet.

After 14 years of putting my music on the internet for people to hear, I can genuinely say that people like my music. On the original mp3.com, I had around 150,000 plays of my music before the site was bought out and the new owners evicted all of the independent artists. Before they sold out, mp3.com did a (what we would view today as) remarkable thing. They started to PAY their artists based on downloads – much like an artist would get paid from plays on the radio. It still wasn’t something that could sustain you solely, but it was real. One month, I made over $2000. They did this successfully, and thrived. So much so that they were bought out for millions. I know it can work. I’ve seen it.

Since that time, they have had many sites try to pick up the torch that was left behind. None of them got it right (in my opinion) until Soundcloud came along. So, a decade later, I upload my music to this new service, and again, I’m having a lot of success with it. I’m fast approaching 200,000 plays. I estimate that over the past 14 years, through mp3.com, Soundcloud and other various sites that I’ve had my music on, I’ve probably been played close to half a million times. But, since the original mp3.com, I have not seen a dime. If this were radio, I would be much better off than I am now. But, since it’s the internet, it’s ok for the providers to be exempt from paying artists. It’s freedom, man.

I recently asked my performing rights representative over at BMI about this situation. I told her about the plays I was getting, and asked if there were any plans to make it so artists would be compensated. She let me know about a legal ruling that upholds a clause in the user agreements on sites like these:

Regarding Soundcloud, their user agreement states that by uploading your music to the site, you license its use to any and all users without any expectation of payment or royalty.

This is because they host your material, which you upload of your own free will, but they do not own, license or exploit it in any way. It is a sharing site, providing an online service to its users. As such, it enjoys safe harbor protection under the DMCA (which you can read here, but I don’t recommend it J). In simpler words, Soundcloud plays are not licensable by BMI or any other licensing agent.

The following is the relevant part of the Terms of Use from Soundcloud, with highlighting by me on the crucial phrases:

Grant of Licence
By uploading or posting Your Content to the Platform, you initiate an automated process to transcode any audio Content and direct SoundCloud to store Your Content on our servers, from where you may control and authorise the use, reproduction, transmission, distribution, public display, public performance, making available and other communication to the public of Your Content on the Platform and elsewhere using the Services. To the extent it is necessary in order for SoundCloud to provide you with any of the aforementioned hosting services, to undertake any of the tasks set forth in these Terms of Use and/or to enable your use of the Platform, you hereby grant such licences to SoundCloud on a limited, worldwide, non-exclusive, royalty-free and fully paid basis.

By uploading Your Content to the Platform, you also grant a limited, worldwide, non-exclusive, royalty-free, fully paid up, licence to other users of the Platform, and to operators and users of any other websites, apps and/or platforms to which Your Content has been shared or embedded using the Services (“Linked Services”), to use, copy, repost, transmit or otherwise distribute, publicly display, publicly perform, adapt, prepare derivative works of, compile, make available and otherwise communicate to the public, Your Content utilising the features of the Platform from time to time, and within the parameters set by you using the Services.

Can you imagine if something like this was granted to radio stations in the early part of the 20th century? When the first performing rights organization was started in 1914 (ASCAP), it was started because artists during that time knew what it was like to not be paid for their work. They needed an organization to collect money from people that were presenting (and making money from) their music, and have it distributed to the artists. In the 1930’s, radio was much like the internet is now, where performers and artists were not paid, and were expected to work for free.

Through hard work and determination, ASCAP (and later BMI) would create a world where the artist was paid for their work. It was never easy in the beginning. Can you imagine walking into a bar where they played music and demanding a licensing fee for that music when the owner was perfectly used to getting it for free? Some workers from ASCAP were thrown out of these establishments or even beaten. I imagine that internet providers would react in much the same way today if compensation were demanded from them.

I have also seen this “music should be free” attitude first hand. As I stated before, I have had a lot of people listen to my music on Soundcloud. Some individuals have listened more than 200 times, as can be seen here: 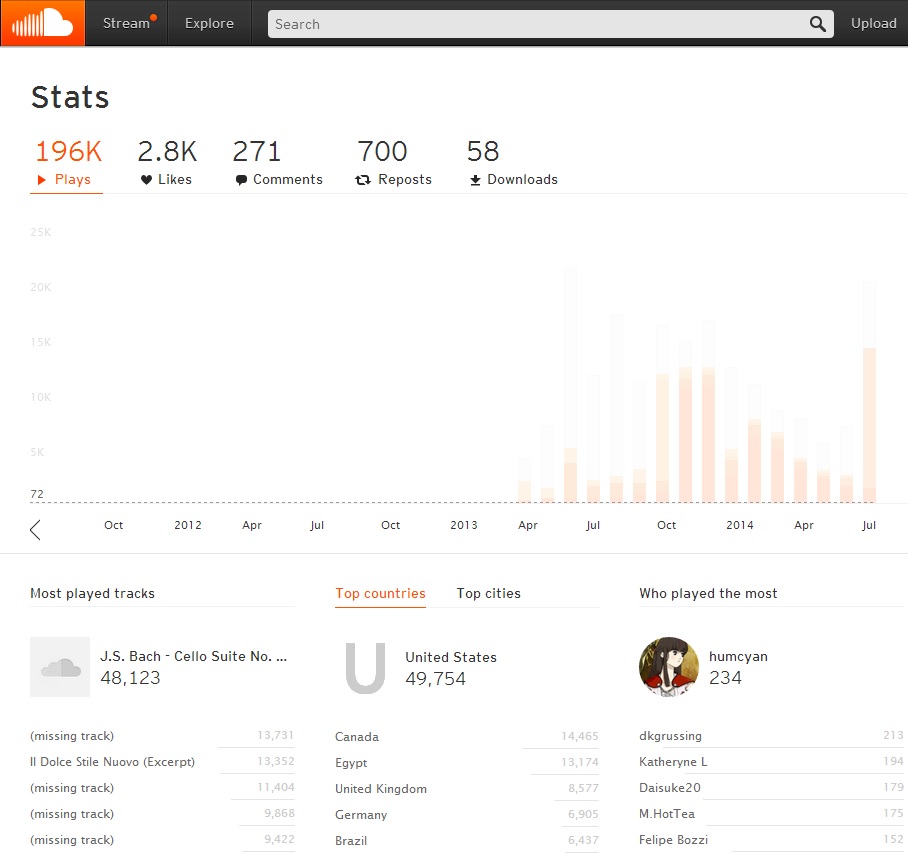 When I was running my Kickstarter campaign to fund my album, I sent my top 20 listeners the following message:

Since you are one of my top listeners, I thought I would let you know about my Kickstarter campaign that I currently have running. First, I appreciate your support by listening to my music! If you’d like a signed CD, or even an LP with original artwork, please take a minute to head over to Kickstarter using the link below and consider becoming a backer! Thanks!

Is this out of line? I don’t think so. I am still under the old fashioned notion that if you like an artist, you should support that artist. I thought that Soundcloud would be a great source of support for my Kickstarter campaign, since I have more than 400,000 followers. I posted audio messages to my Soundcloud page several times, informing them of the campaign. In the end, not even ONE of those 400 some thousand contributed – not one.

I can’t complain – the campaign was successful. My point here is again – not about the money – it’s about the now prevalent attitude that all intellectual property should be free. Chuck D was right – we do have to all figure out how to survive in this new paradigm. However, I have a new respect for what Lars Ulrich and Dr. Dre, among others tried to do at the time in the face of very harsh criticism. I believe they were right, and we, as artists are now back in the position that artists were in at the turn of the twentieth century. We need a new way to deal with this new paradigm, and we can’t just sit on our heels and accept what is now status quo.