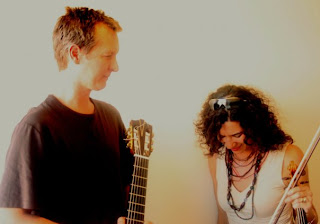 I just found a concert of the guitar/violin duo Duo 46 online. It’s a concert they played in Calgary at St. Stephen’s Anglican Church on April 5th, 2008, and is presented on the Canadian Broadcasting Corporations web site. You can listen to the entire concert online for free, and I have to say they played my piece particularly well. I also really enjoy the pieces by Beaser, Liderman and John Oliver.

I met guitarist Matthew Gould and violinist Beth Schneider when I was a student at the University of Texas in 1997. I wrote Sonata 46 for them in 1998, and they’ve since played it so much and in so many places, I’ve totally lost track of it. They’ve had to have played it at least 50 times, which blows my mind.

You can check it out here: