The Rag and Bone Shop (so far)

Hey peoples… I thought I would get back into blogging by talking a little bit about my current compositional activity and give a small preview of what I’ve been doing musically. Many of you know that I have been busy with my podcast All the Cool Parts, and I’ve let that kind of stifle my personal blogging. I have been at work on other things believe it or not. Aside from playing much guitar and learning new repertoire, I’ve been composing a new cycle of songs for baritone David Small and violinist Brian Lewis, both professors of music at my alma mater of the University of Texas at Austin.

David and Brian first approached me about commissioning a new song for the two of them to perform on one of their favorite poems – A Ritual to Read to Each Other by William Stafford. This would be a compositional challenge. The poem is fairly long, and they wanted it to be for voice and violin only with no other kind of supporting harmonic instrument (like piano or guitar).

The first thing that entered my mind was this fantastic recording by violinist Christoph Poppen and the Hilliard Ensemble called Morimur. On this recording, there is a version of the famous Chaconne from the Violin Partita in D minor, BWV 1004. In addition, there is another version where Poppen plays the Chaconne, while the Hilliard Ensemble sing all of the chorale quotations that Bach wove into the fabric of the music. It’s an amazing performance, to hear this solo, virtuosic violin playing going on with this haunting singing in the background. I thought this would be the perfect opportunity to try to do something like that. After talking with David about it, we settled on a cycle of 4 songs with poetry provided by David. Initially four songs was a problem for me. If you look at any of my multi-movement music, you will notice a pattern – it’s always an odd number of movements so I can have everything revolve around a central movement. With four – well, there’s no center damnit! I’ll explain how I dealt with that little problem later…

So I started with the first song that we talked about, and shortened the title to simply Ritual. I knew this was going to be the center song (that’s right – the middle of five – I said I would explain later :)), as well as the longest song in the cycle. So even though I had a loose idea in my head, inspired by the Morimur recording, it was still a challenge creating a viable and real accompaniment from just a solo violin. The poem too was a bit stream-of-consciousness-y, and I wanted the piece to be very musically unified – much like the Bach. What I ended up doing was coming up with a couple of main themes for the violin and the voice, and then changed and augmented them to fit whatever the words were trying to convey. Here is a small taste of what I came up with – the first page of the score: 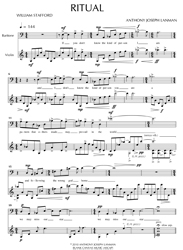 The second song I tackled was a translation of I Am Not I by Juan Ramon Jimenez.  I should mention that the remaining songs are to be for voice and piano trio.  With this one, I had a really clear idea of how to start it, with a really cool melodic line for the voice, which I paired the strings with (which is another thing that’s unusual for me since I tend to opt for counterpoint over doubling).  After I wrote about 20 measures, I started to get a bit stuck, because it started to go in a direction I didn’t want it to go in.  Previously, I have really tried to avoid having direct or obvious “styles” in my music – like something that really sounded like blues for instance.  I’ve always strove for my music to sound like me I guess.  This piece was really moving in a kind of South American direction – lol, and I fought with the piece for a few weeks trying to get it to go another way.  Finally, I just decided to stop fighting and let it be what it wanted to be.  After that, the composition was smooth sailing, and I ended up with something that I really like. 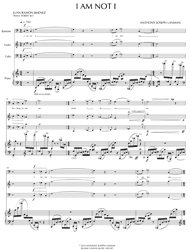 So, how did I take four poems and make a cycle of five songs?  Stay tuned to find out!  I’ll make another post when I finish the cycle and explain it all.